Between These Folded Walls, Utopia

What do you hold close? Where is your secret place of belonging? If you had to leave everything behind and begin again — who would you be?

Between These Folded Walls, Utopia emanates from the current political reality. With a deep interest in the human story, fine art photography duo and Hasselblad Ambassadors Sarah Cooper and Nina Gorfer imagine a playful utopian theatre, reminding us that we are all caught in the imaginary world of our own interpretations and cultural conditioning. The protagonists in Cooper & Gorfer’s portraits are drawn from this new diaspora — a young generation of women who have experienced what it means to uproot their lives and sense of self. Photographed like goddesses, the young women’s vivid portraits are a judicious and of-the-moment examination of our historical memory and possibility. Using the Hasselblad X1D, Cooper & Gorfer intertwine photographic portraiture with beautifully executed collage techniques and hand-drawn textures, blending photography and painting in their series, Between These Folded Walls, Utopia. 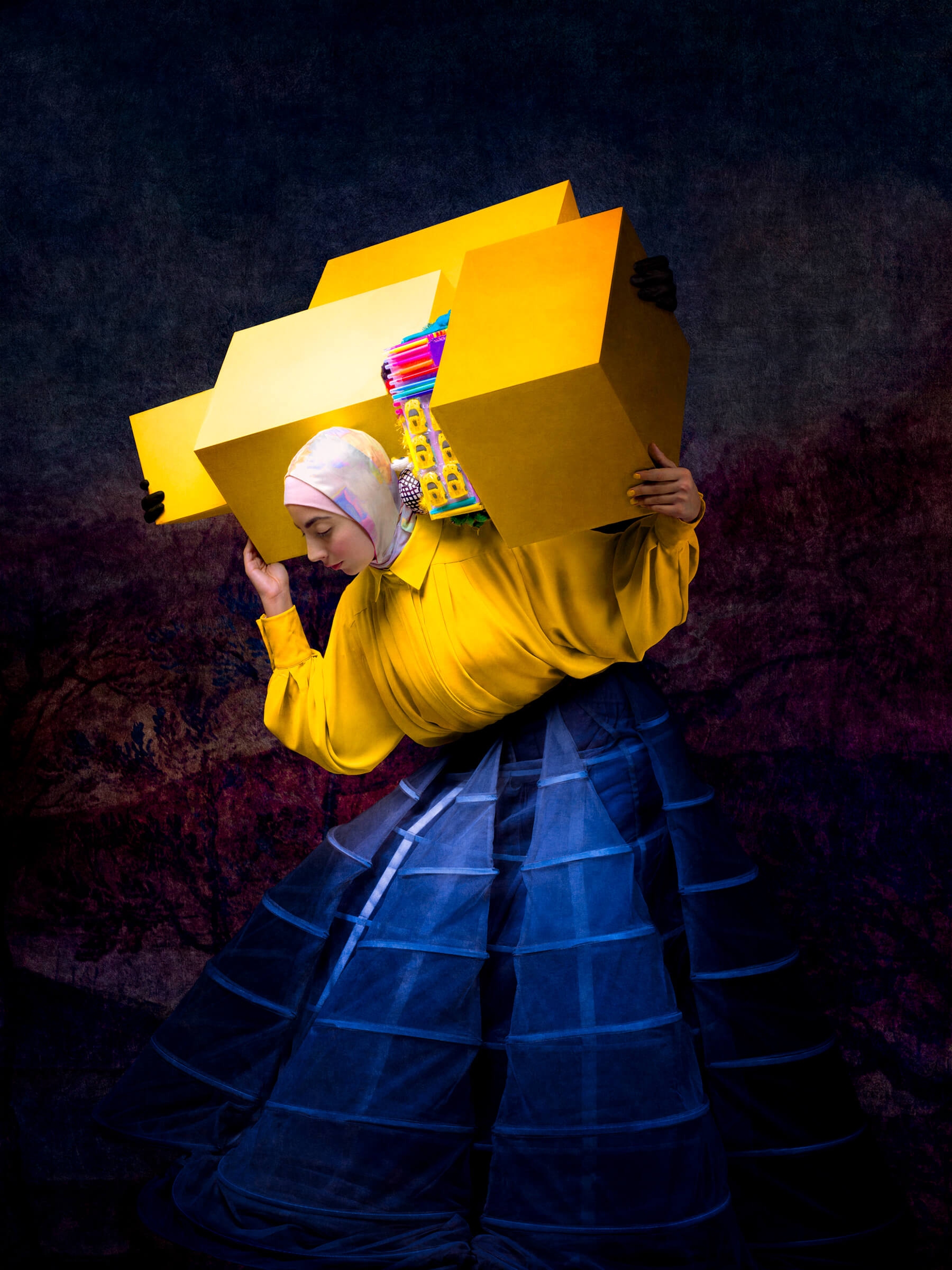 Over the past 14 years, Cooper & Gorfer have traveled to Argentina, Iceland, Kyrgyzstan, and Qatar, among others, to work with women from various cultures exploring issues of memory, feminism, migration, dislocation and the malleability of identity. Intrigued by the notion that today’s world is in a state of lost utopia, the artists began to dig deeper into the meaning of utopia, triggering a three-year collaboration with young women from their local communities in Sweden.

“The age of our protagonists was important; in adolescence, there is this possibility of obtaining utopia. We wanted to revisit that moment,” Cooper explains. The young women featured in the series are all between the ages of 17 and 24 and have been touched by forced migration in one way or another. Many of them came as refugees with the last migration wave in 2015, whereas others are second generation, born in Sweden to expat parents.

Usually, Cooper & Gorfer ask their protagonists to bring an article of clothing that has been part of their family and culture. Due to relocating abruptly, many of the women could not rescue more than what they could fit in their pockets: a key from Damascus; a scarf from a grandmother. Just as a utopic society would be deconstructed and rebuilt, the girls too were disassembled and re-constructed, cutting themselves out of and pasting themselves into an imaginary utopian world. 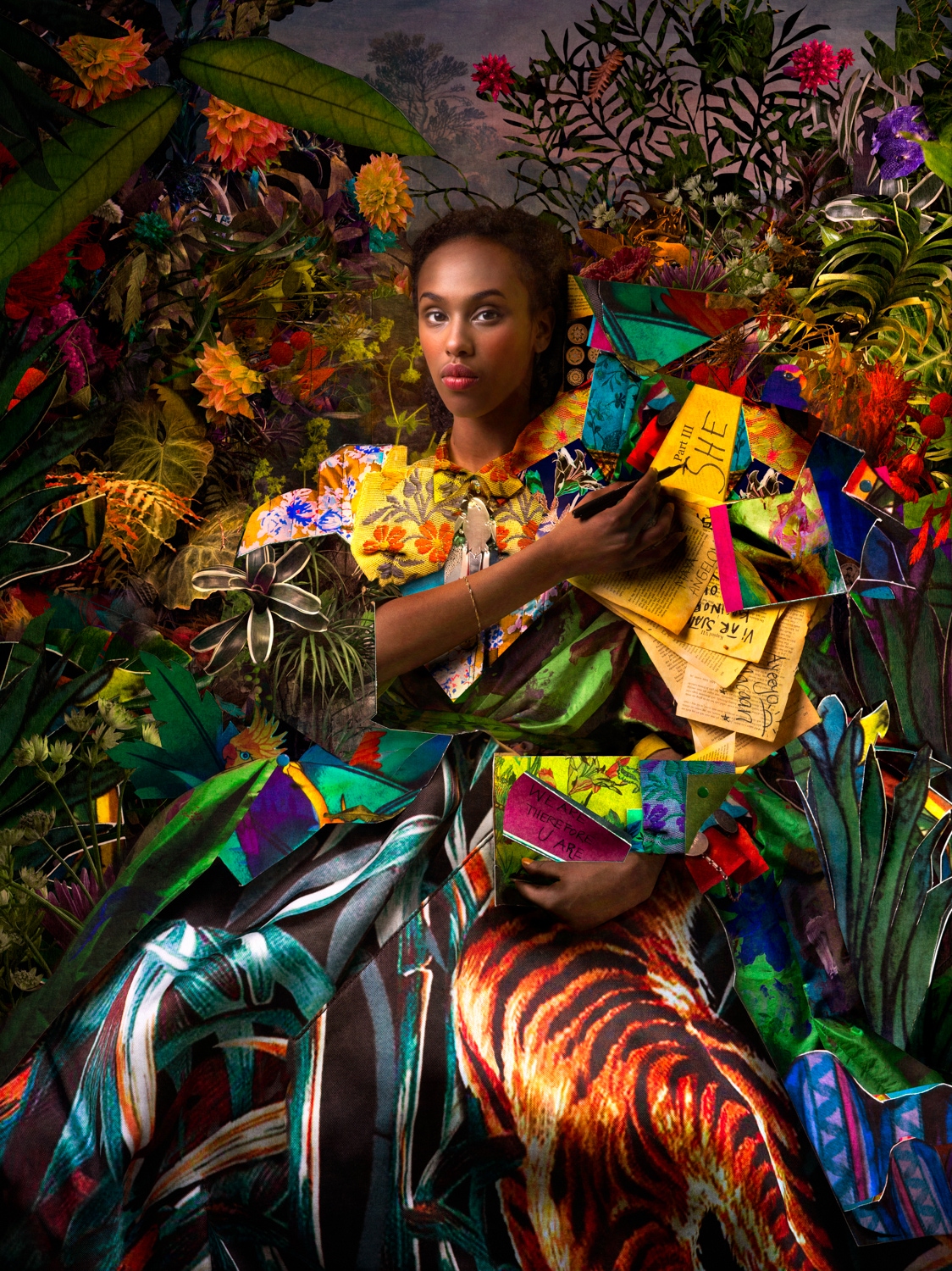 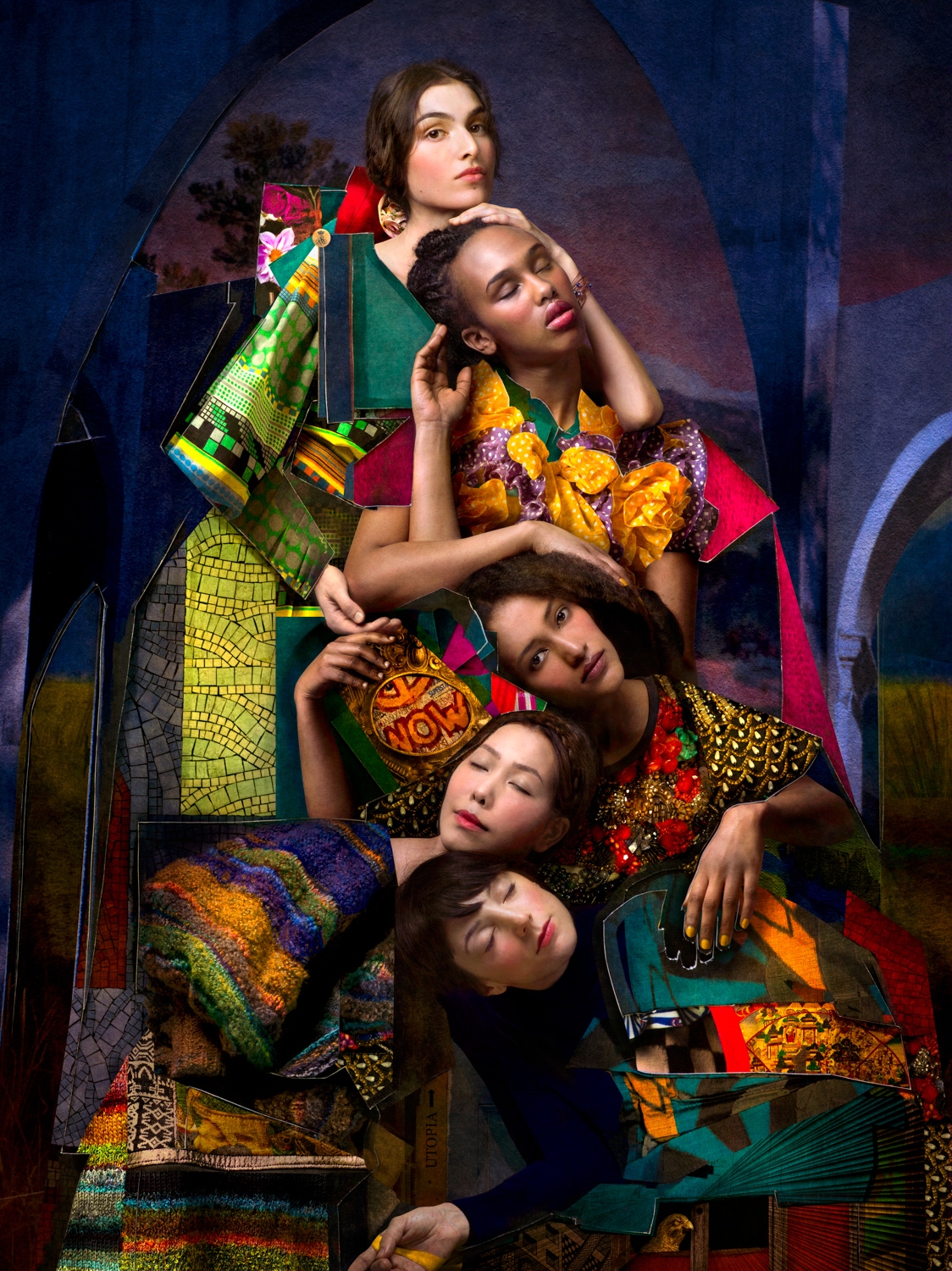 The construction process was important to us, that we literally build them, putting things onto them. It’s this idea of now that they are here in Sweden, they will be influenced by this culture, clothed and constructed by it. Each society also has its own preconceptions – how it wants to see and understand certain things, groups, and people. 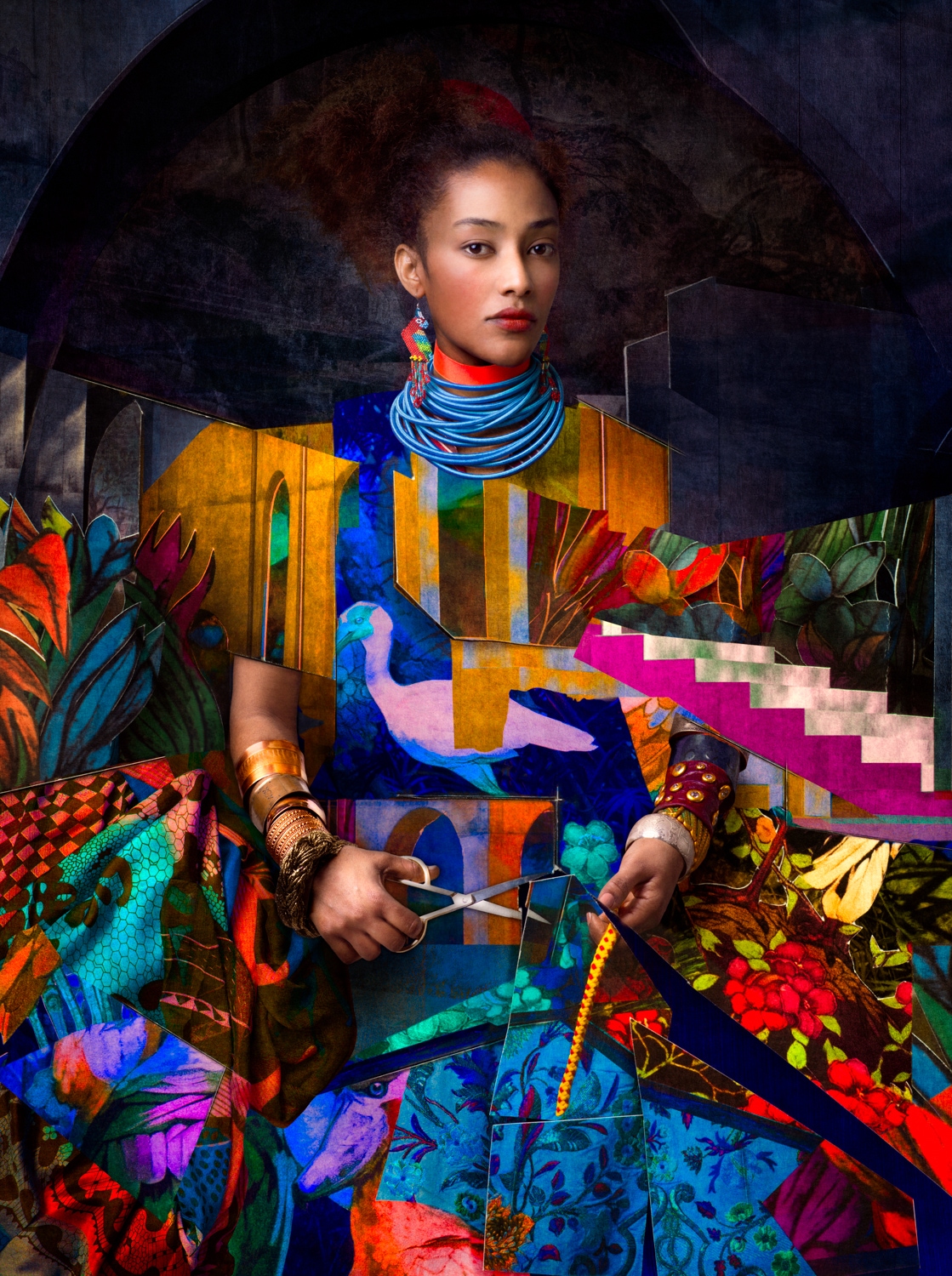 In Eritrea, tens of thousands of young people are forcefully conscribed to life-long compulsory military service. Conscripts often work 72-hour weeks in extremely harsh conditions with inadequate food and low pay. No one is legally entitled to take leave. Eritrean teenagers go straight into military service after their education. As many before her, Yohana had to leave her life and family behind to flee this fate. Her only chance of a future lay in another country, beyond the smugglers’ route through Sudan, Libya and across the Mediterranean.

Yohana arrived in Sweden in 2015. She is still shaken by the potential threat of being prosecuted and wants to keep most of her details private. In order for her to have a life, she was forced to leave everyone she loved behind. An inhuman choice to make, a new future that comes with the painful loss of the past.

Maryan grew up in Kenya with Somalian heritage. At the age of 15, Maryan was forced into an arranged marriage to a Somalian man, twice her age. Because underage marriages are illegal in Kenya, her mother and future husband changed her official age from 15 to 18. Maryan gave birth to two daughters before her husband took her to Sweden in 2014. Living in Sweden opened up new possibilities for her, gave her more power and a support network of women. One day, unaware of being pregnant with her third child, Maryan took her two daughters and moved to a women’s shelter. She divorced the husband she never chose for herself; and for the first time in her life, moved into her own apartment – a safe place she can call HER home. 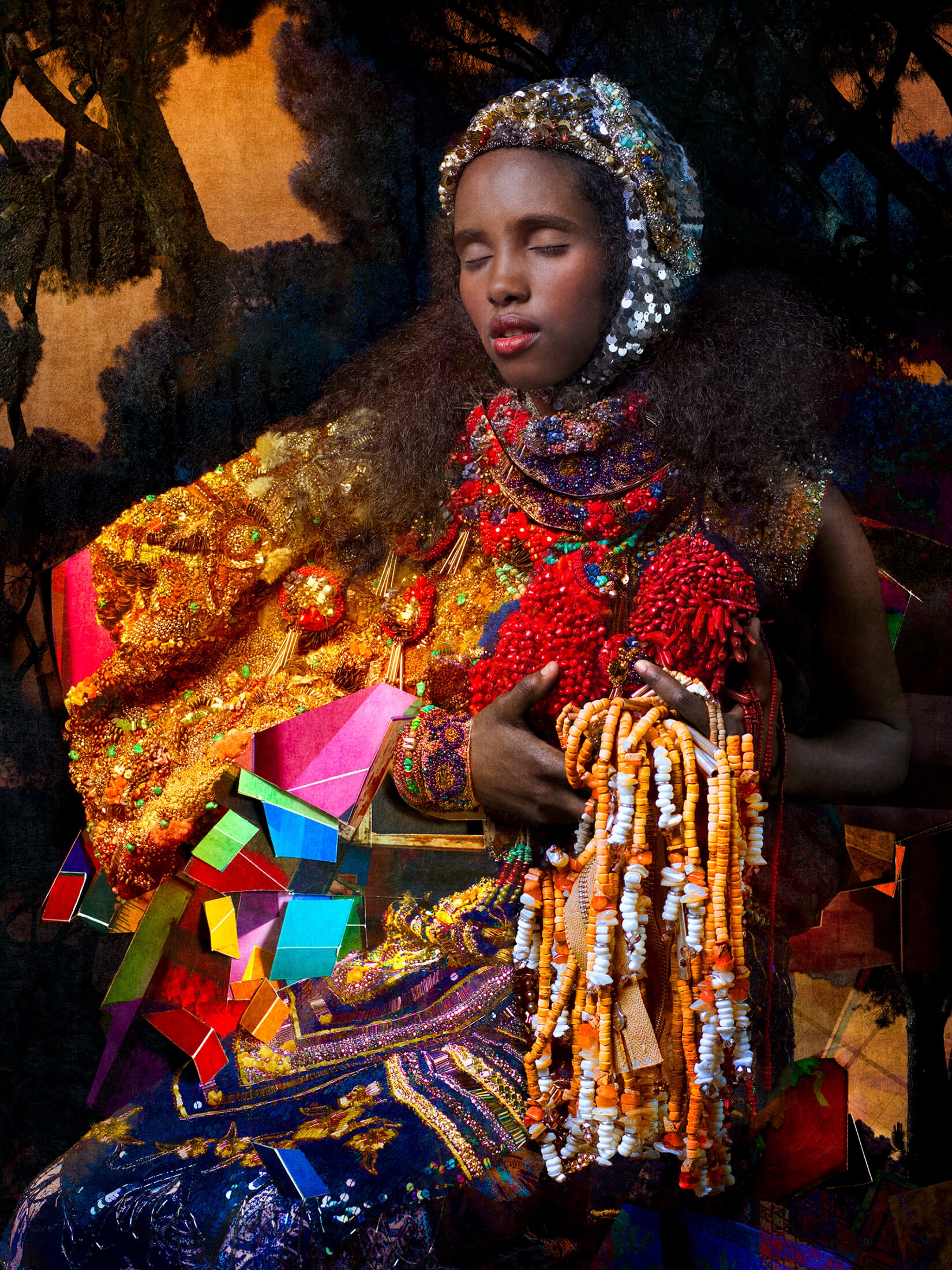 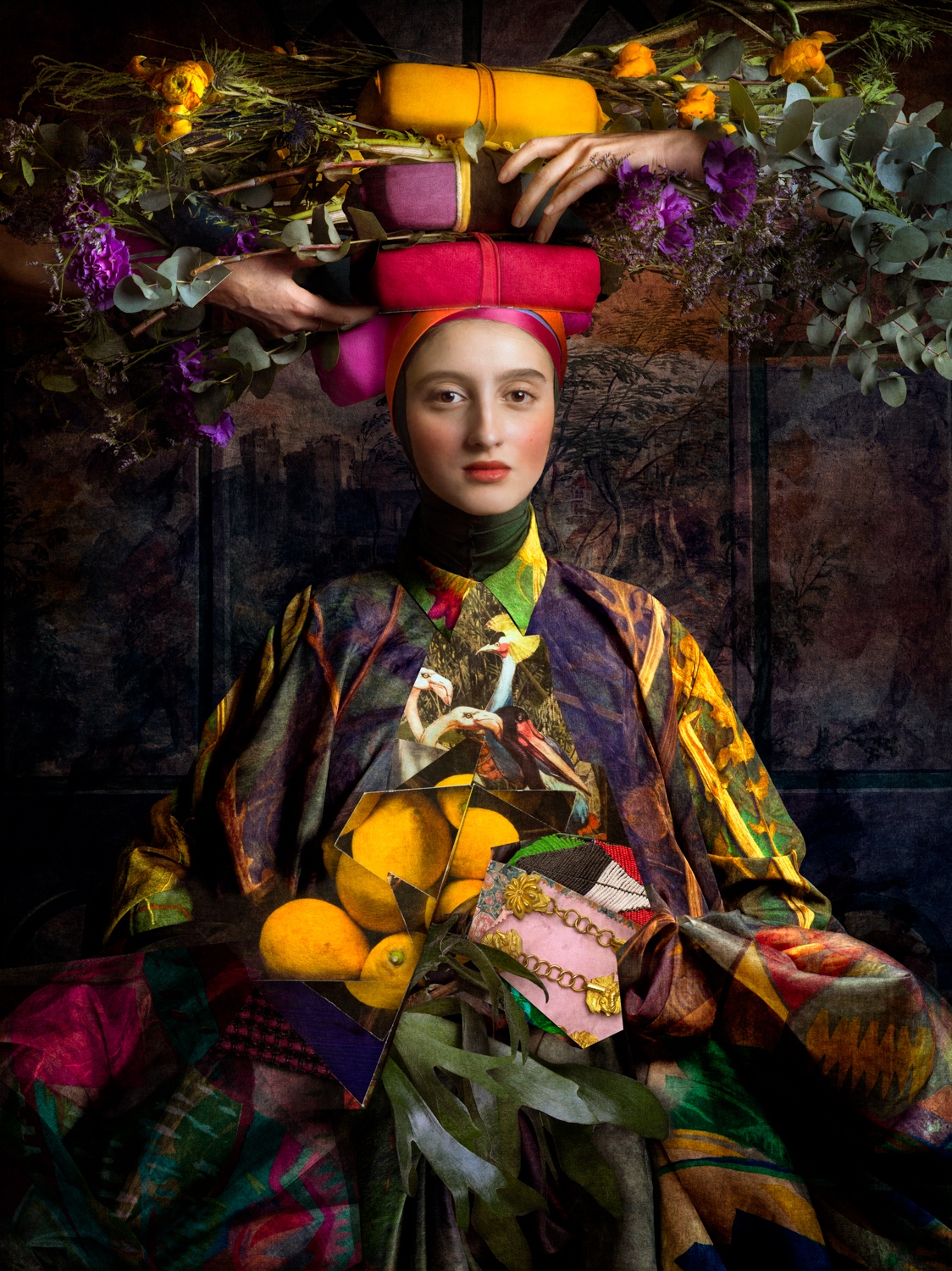 Jana’s family is from Palestine but her family moved to Lebanon before she was born, due to the violence. In her interview she spoke about the dilemmas of not having a passport, resulting in constricted mobility, and no right to education. She described it as a feeling likened to that of being in a constant fog, unrooted, never fully belonging to the society in which they lived. She has a Swedish passport now, and therefore sees Sweden as her new home, where she feels welcome and accepted, given the possibilities of a full citizen she had not been granted before.

When we asked her about a utopian place, a place where her heart goes to and feels home, Jana described the topography of her family’s home town of Nazareth, which she has never been allowed to visit without the right passport. She talked about the many stories she has been told about her family’s place, just outside the town, where lemon trees grow in the surrounding garden. She explained her affinity to the solitude of nature.

The pair begin with photography, with the Hasselblad camera and photographing their subjects. This is followed by multiple states of collaging where they re-photograph the image over and over again. A mix of digital collaging and physical cutting and pasting and re-digitalizing is done in order to achieve their illusionary images. “As you can see in the photos, the bodies are multi-leveled, reconstructed from front to back. Parts of the arm are missing and then underneath you can see the layer of another world. The girls are locked in a labyrinth of this created world that we have imagined for them,” explains the duo.

Cooper & Gorfer’s process relates to this idea of a utopia (meaning “No Place” in Latin) – in the end, a utopia cannot be easily built. “It has to be annihilated and deconstructed in order to have the chance to experience it. It has to be dismantled and rebuilt, but ultimately, it’s always just an illusion,” says Gorfer. 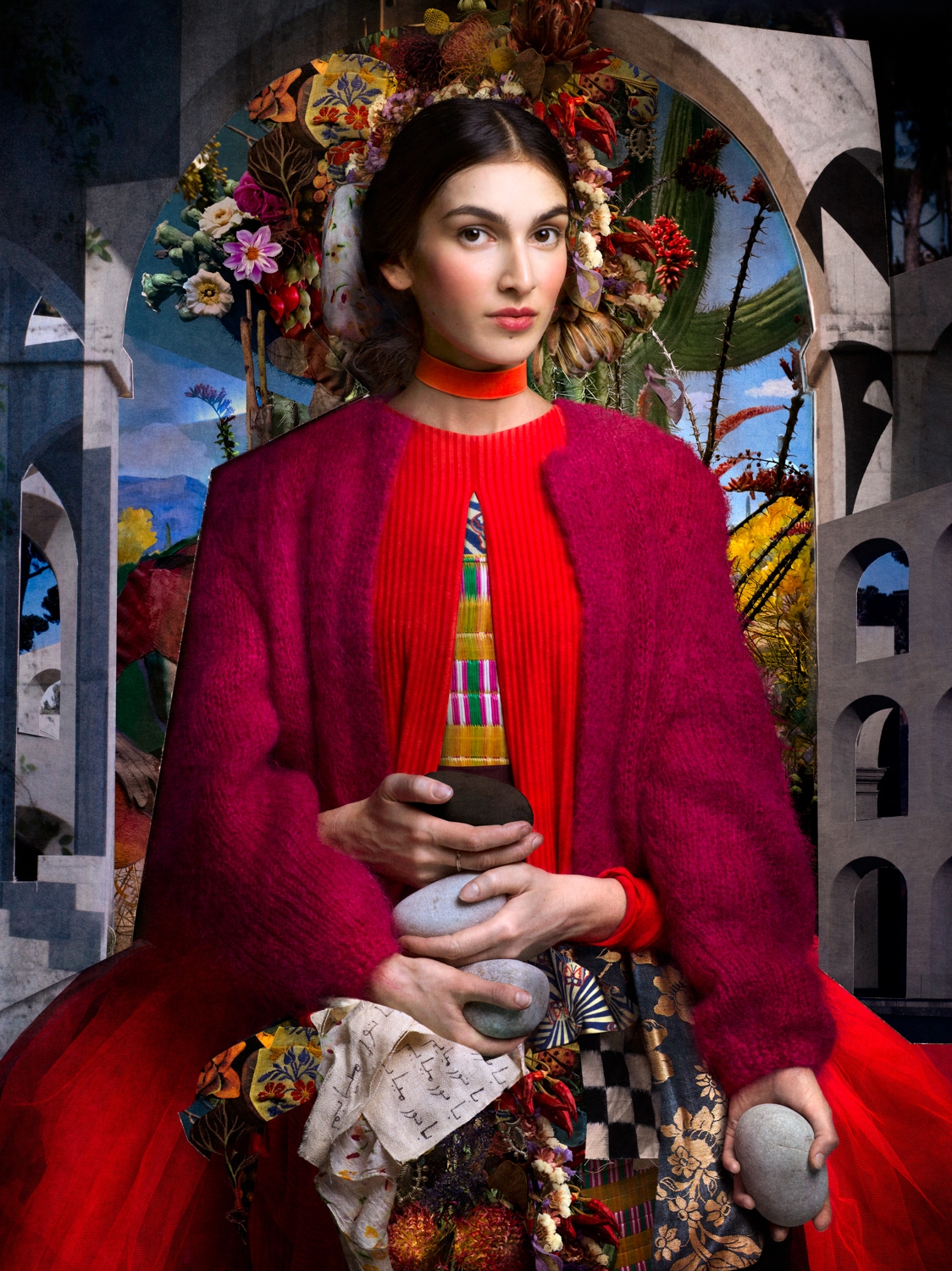 We’re collectors. We use the camera constantly to collect textures, situations and items in order to describe the nature of a place or person. And you never know when you’re maybe going to find something that’s good for the collection. The compact and sleek design of the camera made it so that you always had the camera with you. There were a lot of situations where, if it had not been for this camera, I would have missed the moment or had to return to take certain shots. Being on the run all the time, the X1D was the perfect camera for this project.

We were really, happily surprised by the quality of the X1D. We were in a lot of low-light conditions where it performed with perfection. The images are such high quality and the colors are absolutely beautiful and natural. Combining the quality and the light weight, the X1D is very practical. 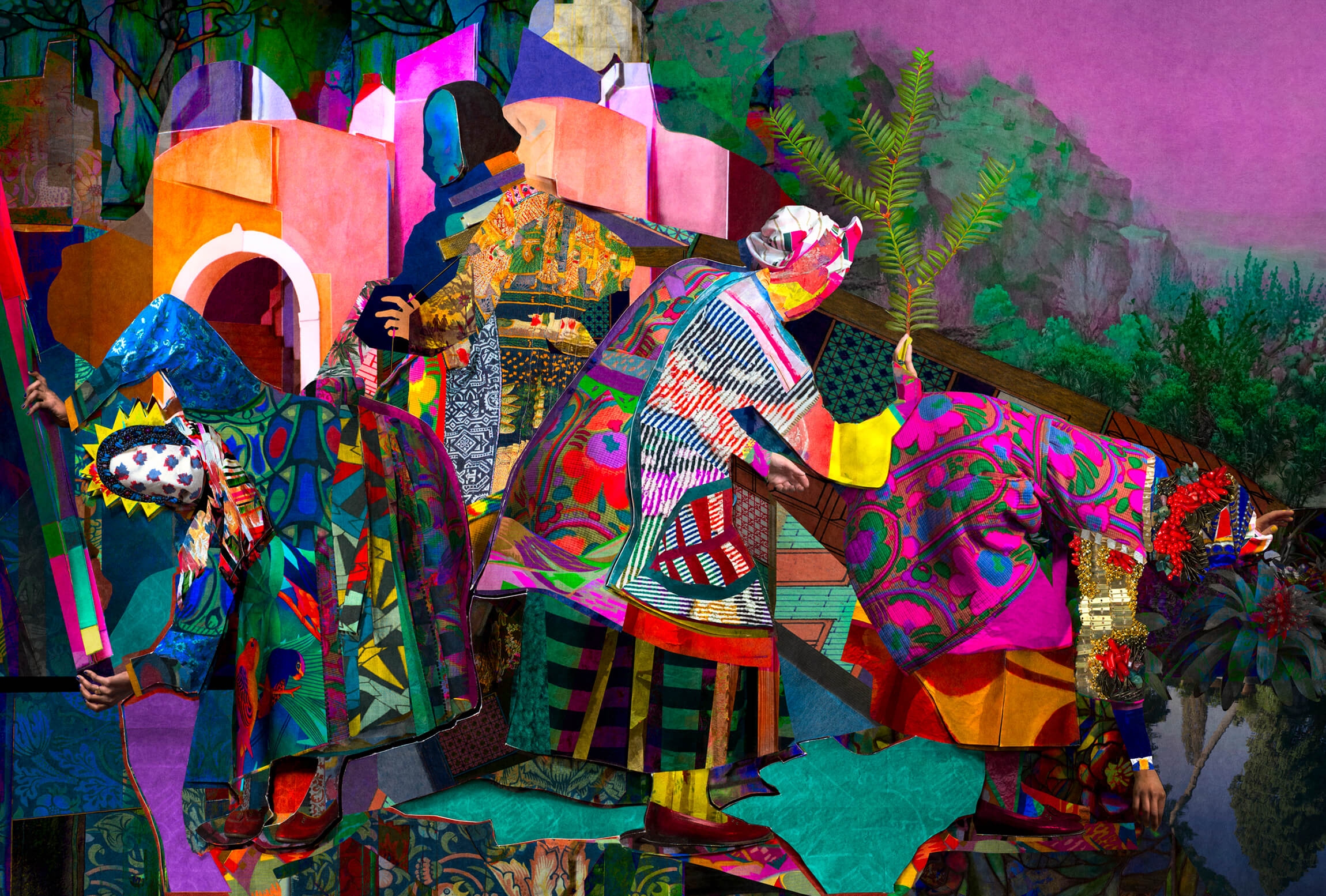 Sarah Cooper (Pittsburgh, USA) and Nina Gorfer (Vienna, Austria) met in Gothenburg, Sweden in 2005 while studying their master, sparking their collaborative work and creative partnership. Gothenburg became their studio – an incubator of ideas. With backgrounds in fine art photography/music production and architecture, respectively, they led different careers before photography became their common base. “We released each other’s creativity, sort of that perfect storm,” says Cooper. Focusing on female subjects while exploring powerful, political and personal themes, the fine art duo is known for their visually rich collage portraits and free visual language. See more of their work here.

If you have the opportunity to see this series in person, it is currently being exhibited at Fotografiska NYC until 7 February 2021. See more info here.

Sean Conboy put the XH Converter 0,8 to the architectural test, photographing the exquisite interior of the Winter Gardens Blackpool in England. Combining it with the HCD 24mm on the X1D II 50C, the Converter allowed for the H System lens to achieve an extremely wide-angle 19mm focal length, letting him capture the full grandeur of the venue.