Finding himself amidst the most incredible craftspeople from Lima to Cusco to Puno, Roman Jehanno traveled across Peru to capture stunning portraits of various artisans, farmers, bakers, and more. Working every day in the same style as the Nazca or Incas used to do or in the traditions that the Spanish brought, Roman’s Peruvian portraits captured with the H6D-100c help to preserve and spread this cultural awareness about the lives and work of so many talented, hidden artists.

Roman’s ongoing project to capture portraits of some of the world’s most talented and unknown workers and craftspeople has brought him to locations like South Africa, Bali, and Japan. Set on adding a Latin American country to the list, Roman traveled across Peru, starting in Lima and making his way to Pisco, Ica, Nazca, Arequipa, Puno, Juliaca, Cusco, Abancay, Ayacucho and all the smaller towns in between. Along his journey, he met ceramists who keep the traditional ways of working as the Incas, talented weavers, farmers using the Spanish style of breeding and raising horses, and so much more. 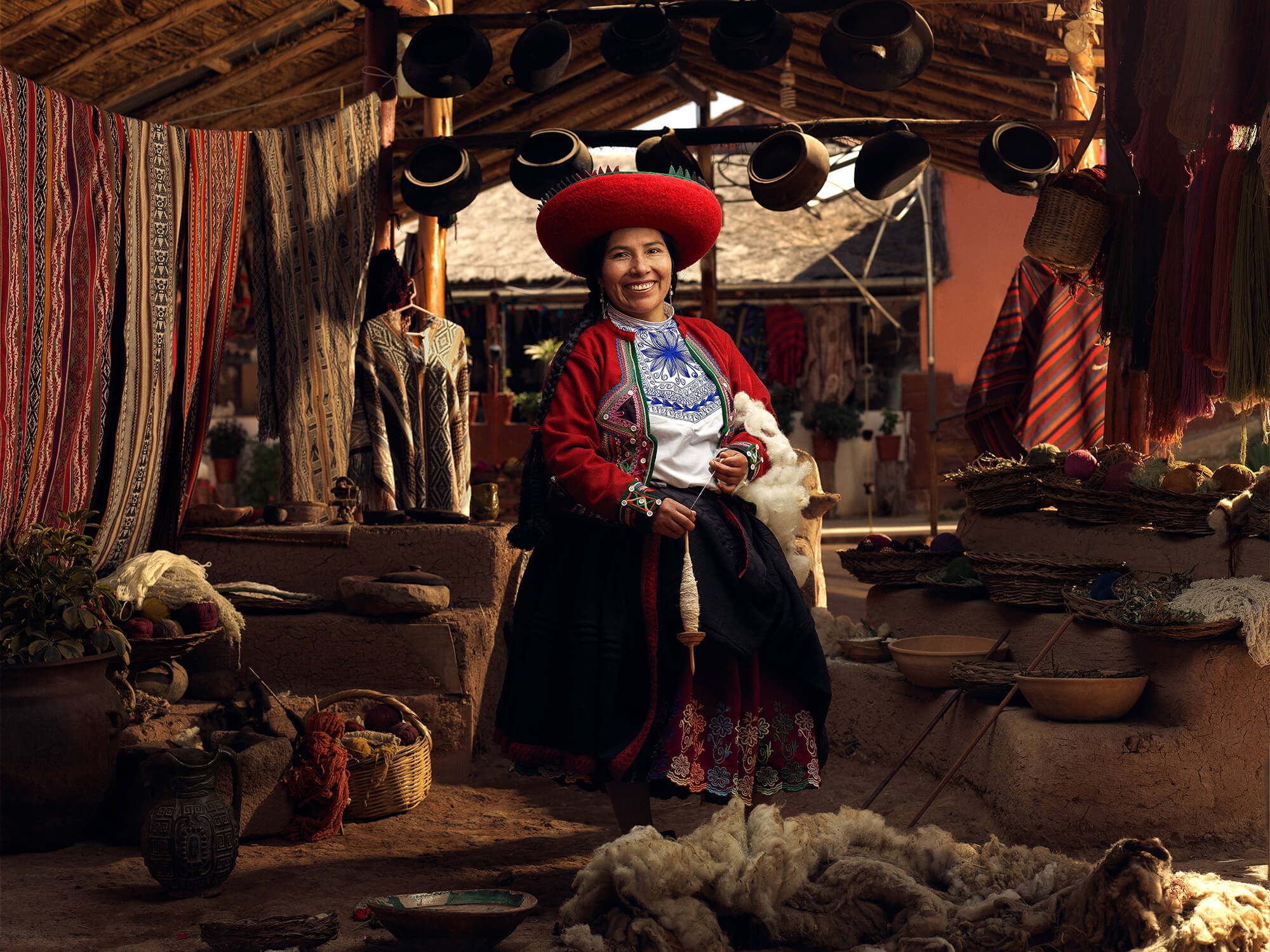 Marleny has been an alpaca weaver since the age of 9. She began weaving bracelets and belts before moving on to more complex and technical pieces such as ponchos, rugs and table runners. At the artisanal cooperative where she works, everything is done by hand, from shearing the alpacas to the last line of weaving.

Back in the days, all the bakers of the Oropesa village used to have all their ovens in the same spot at the center of the village. Nowadays, every baker has their own oven where they make and sell their bread. Antonio, 82 years old, starts work at 3 am every morning with his grandson. His oven can cook about 50 large breads at a time. A small fan in the oven fans the fire continuously but the baker must be able to perfectly balance the temperature in the oven at all times

The Quelqanka community of farmers lives in the Peruvian Andes near Patacancha where they have been raising llamas for generations. 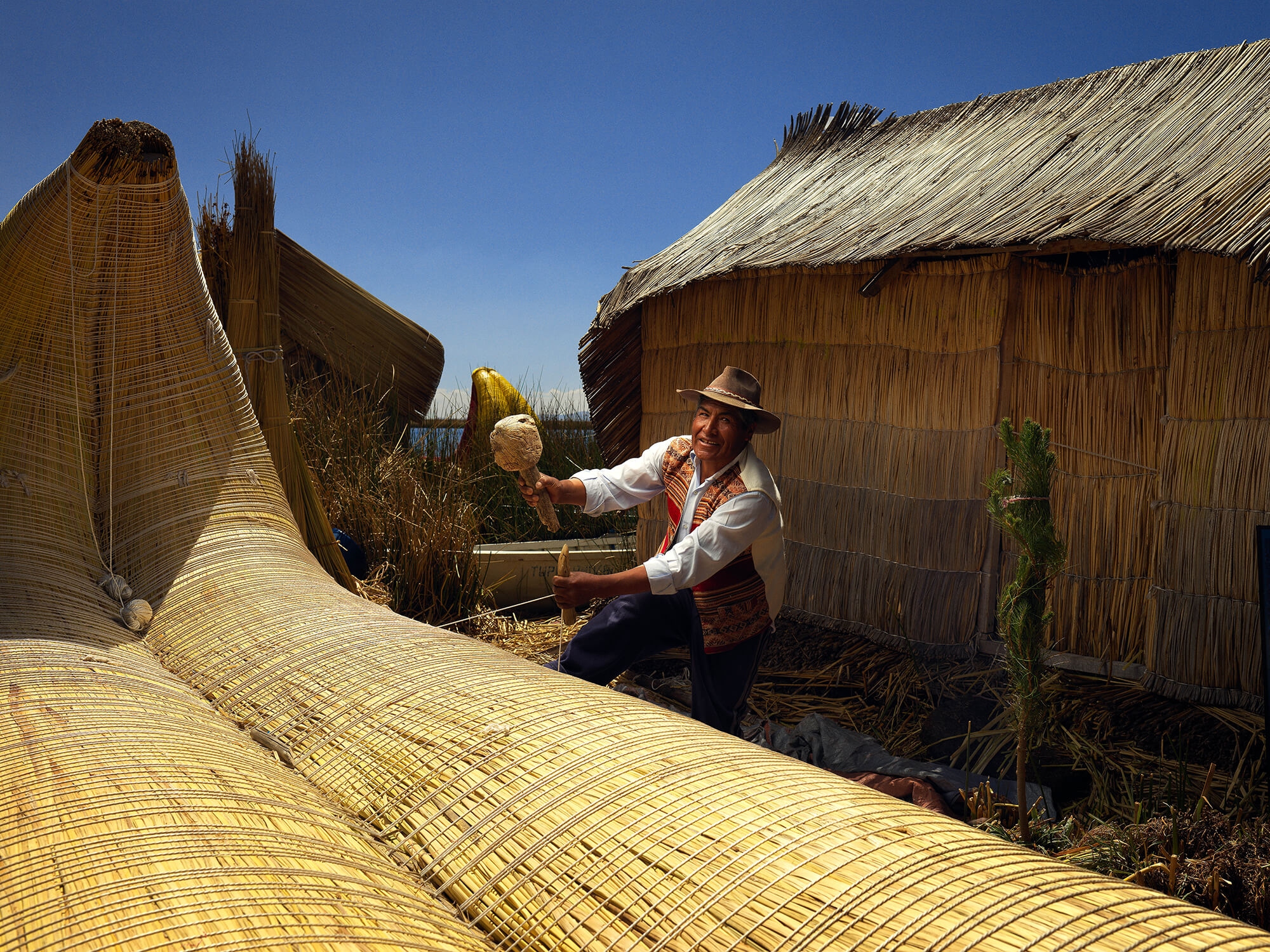 Roberto, his family, and several other families in the region, continue in the Uros tradition. The Uros people lived on an artificial archipelago of about forty floating islands made of endemic reeds called the Totora. Some families continue to live like their ancestors and avoid tourists by living on such man-made islands. It takes 15 days to build a reed house and about 1 month between 3 workers to build a raft. A reed island has a lifespan of about 30 years. 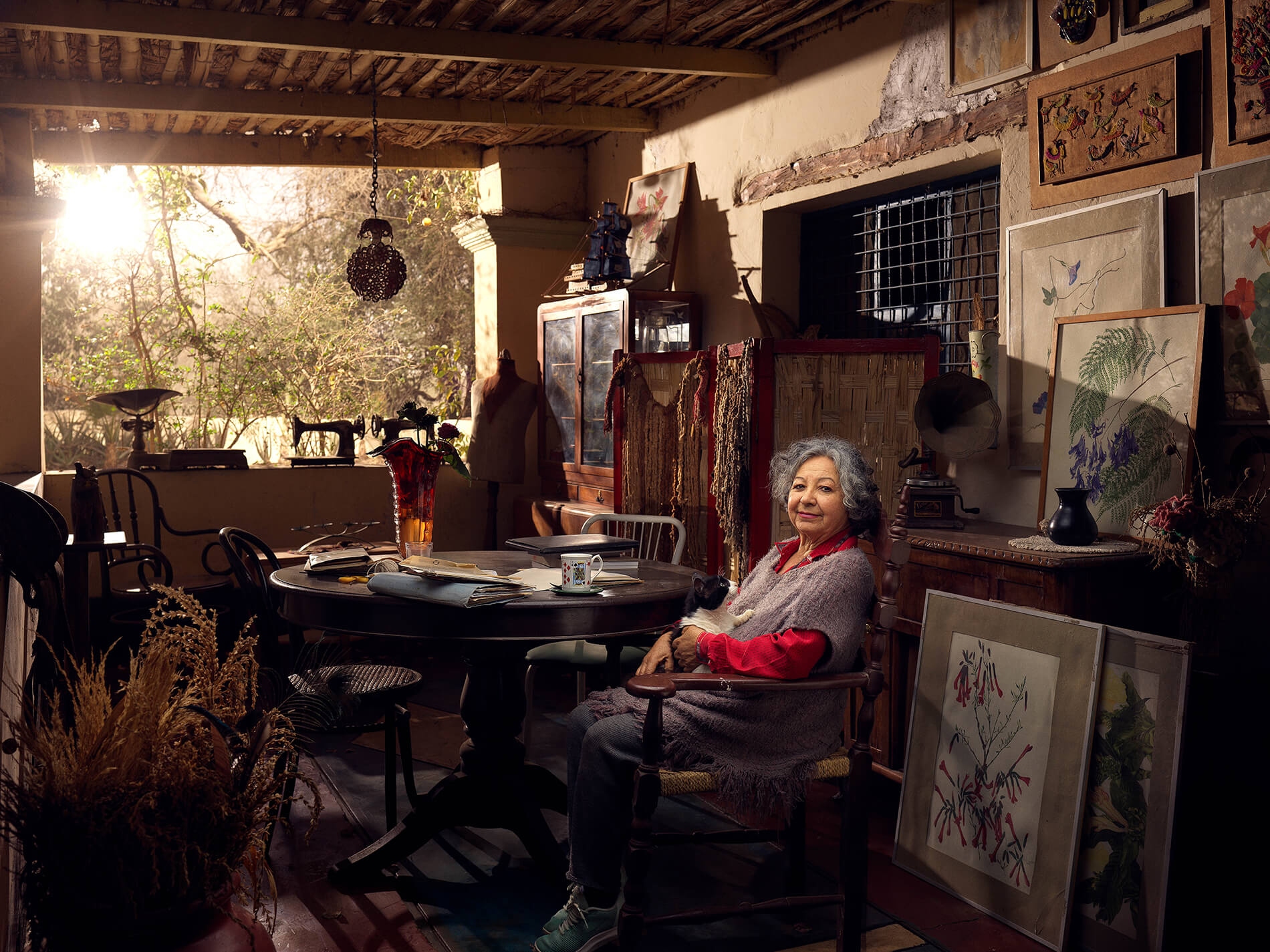 Olivia is a multidisciplinary artist from Nazca. She has painted and registered all the plants and flowers of the Nazca region, compiled as watercolors in a book. Her work has helped classify an extended area of the Nazca nature as a reserve.

Alberto is a highly precise Nazca ceramist who works closely with several archaeologists specializing in pre-Hispanic civilizations. His copies of ancient ceramics are so realistic that they can be easily regarded as genuine relics. This is because he was able to find out the exact amount of sand, water and clay used by the Nazca in addition to their ancient techniques.

Alejandro Flores, 66 years old, is a highly regarded musician and weaver from Taquile Island. His parents taught him how to use a weaving loom. This cultural legacy has been carried out at 4200m above sea level at the Titicaca Lake for multiple generations. 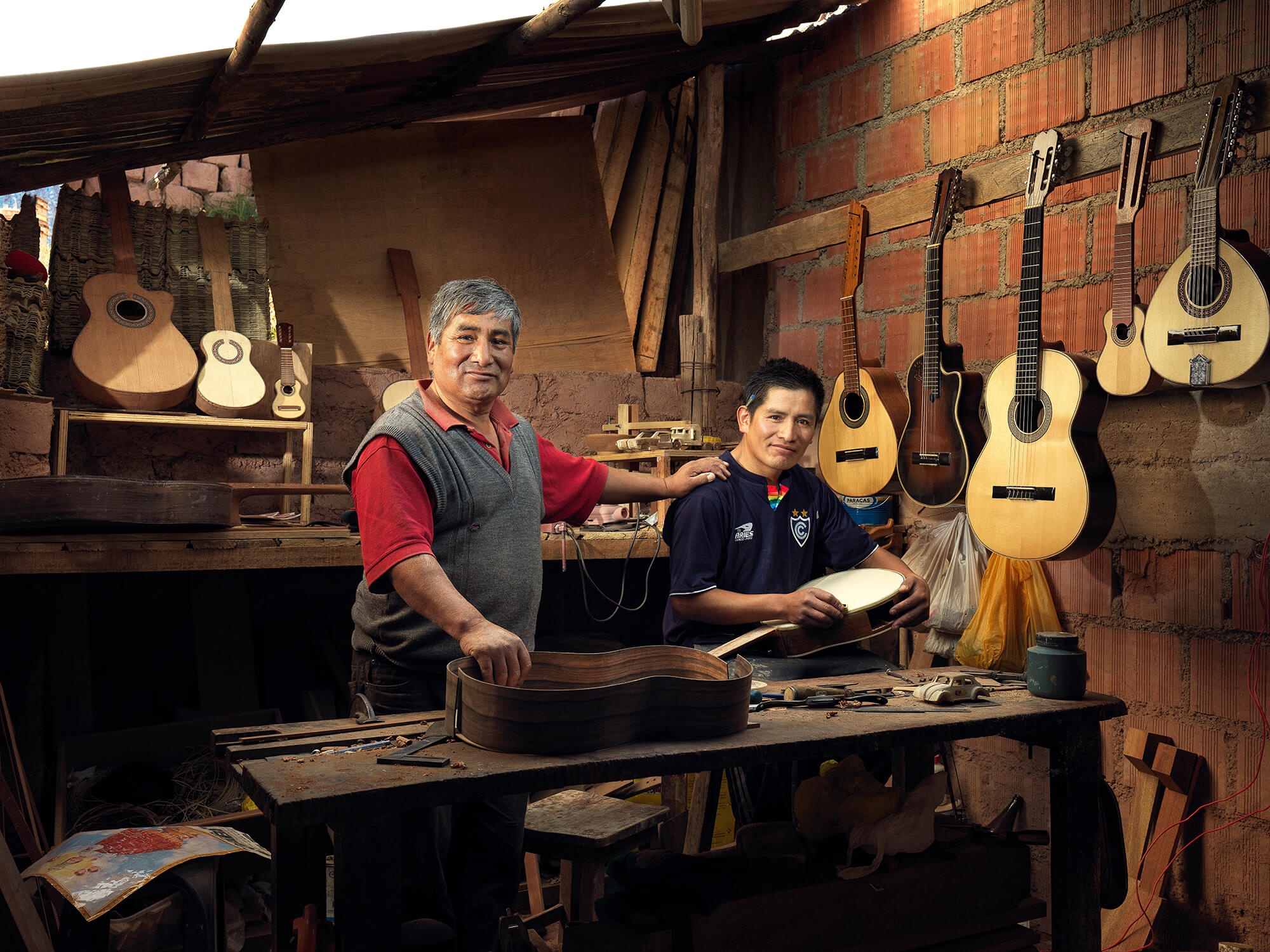 Mauro, from Chara in San Pablo, has 3 daughters and a son who are all involved in the guitar business with him. Several Peruvian musical personalities have even ordered from his shop. He started teaching the craft to his son Yovani at the age of 15. The recognized rosettes (design around the center hole) on their guitars take a whole day to make. Nowadays, Yovani makes all the rosettes as his father’s eyesight gets weaker with age.

Mrs. Torres helps her daughters to sort corn grain for chicha production, which is a fermented corn beer. It takes about two weeks of work to produce a good quality chicha from the beginning of sprouting to tasting. 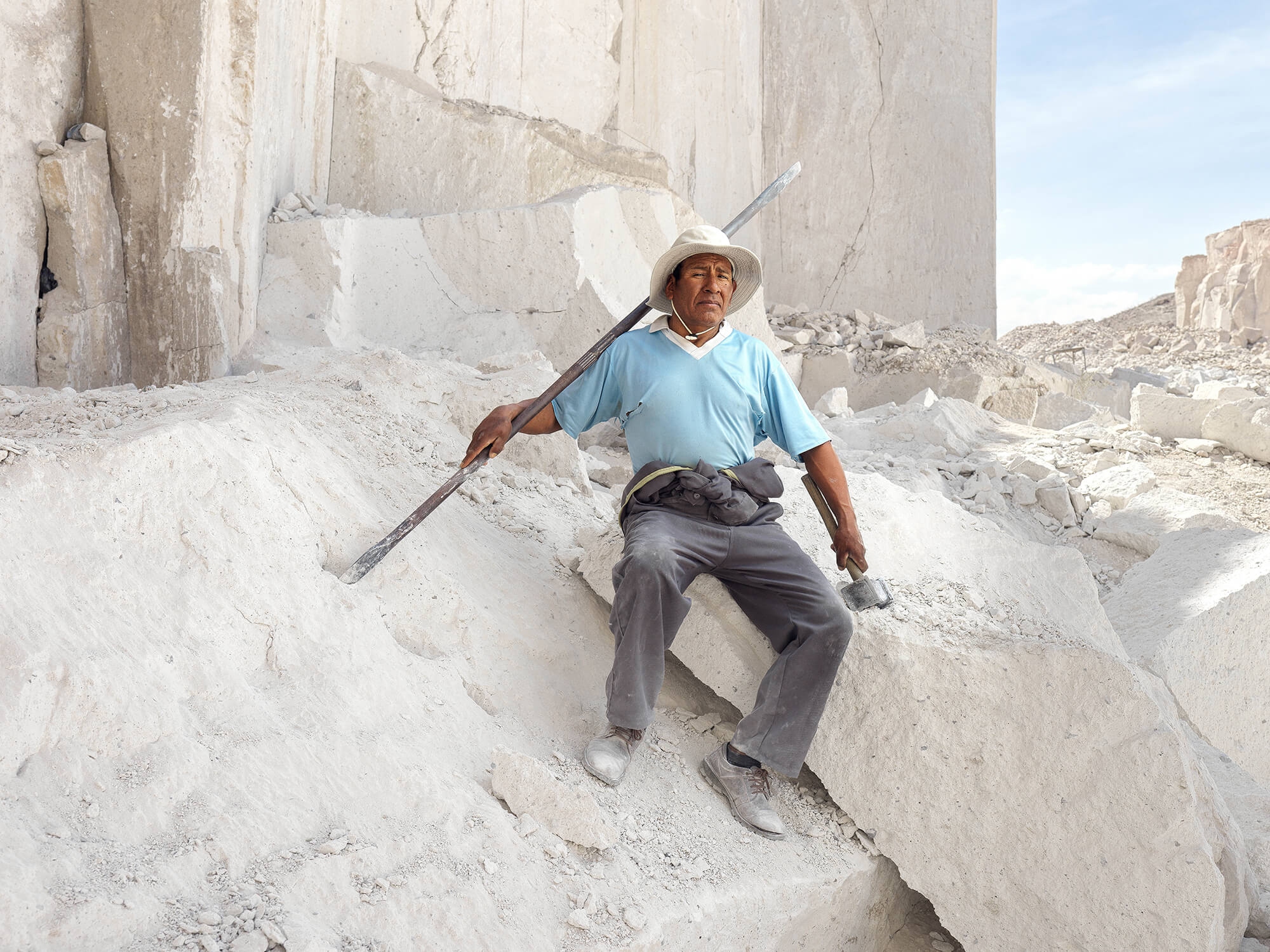 Living and working in Arequipa, Saturnino is a miner in a sillar quarry, a white stone that has been used for centuries in construction of the city of Arequipa. It takes him about one hour to be able to extract a perfect block from the quarry. On a good day, he can carve out about 12 stones. Nowadays, Saturnino works more closely with tourists, explaining the history behind the quarry, the sillar stone and everything behind the extraction process. 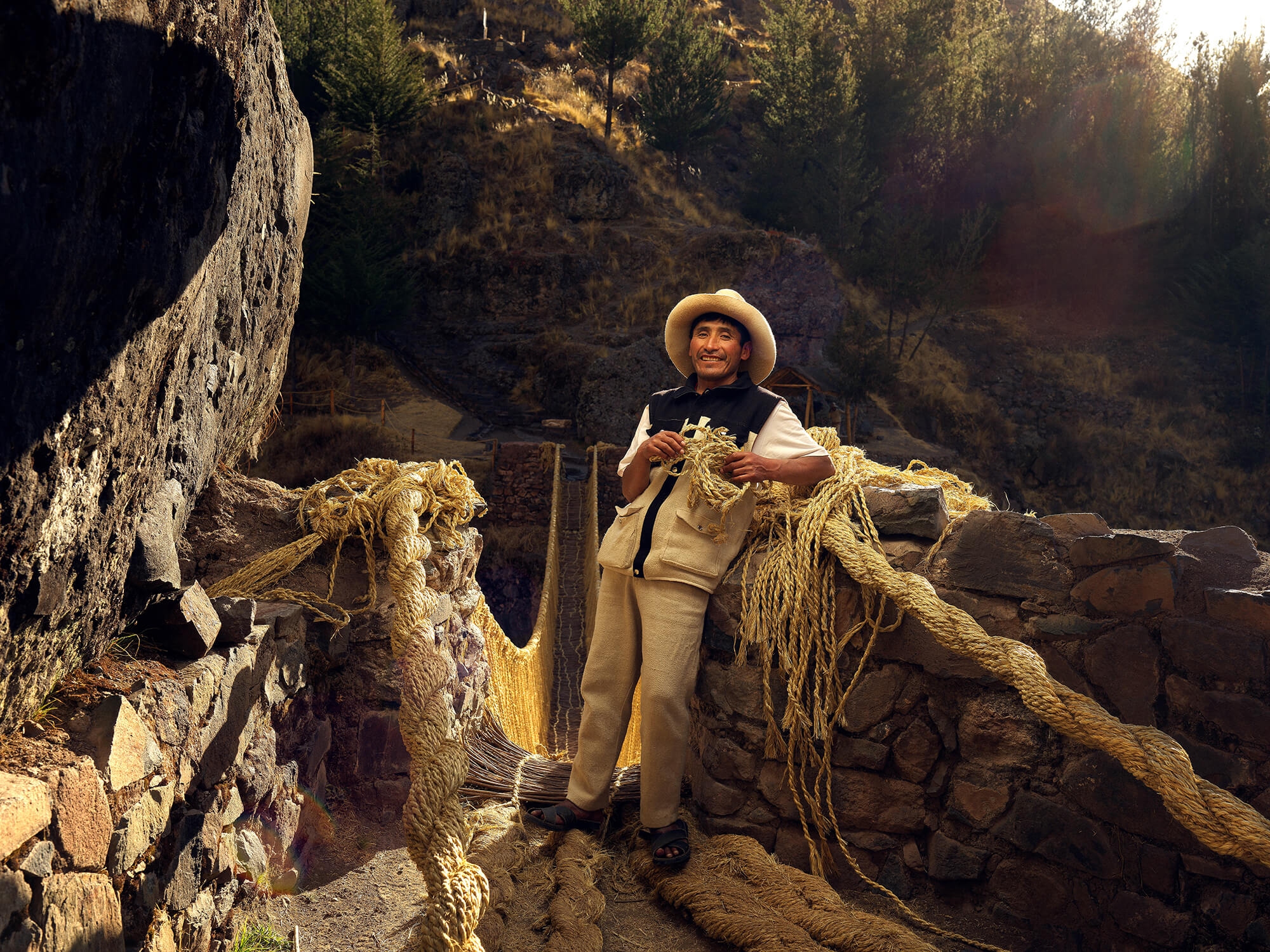 Q’eswachaka Bridge is the last remaining Inca rope bridge. Strung across the Apurimac River, the residents of the region keep the ancient tradition and skills alive by working on the bridge every year. The reconstruction is a communal effort done in honor of their ancestors and the Pachamama. The bridge is made on site with local grass weaved to form strings and rope.

Nilda and Fortunata, 36 and 57 years old respectively, are the two daughters of Antonio Licona Tarco, the baker. They live and work in Oropesa, a village close to Cusco, where they sell their father’s bread.

A master of the ultimate lighting setup, Roman’s simple yet precise method includes using a 90x120cm softbox mounted on Broncolor Siros lighting set above the subject. “The difficult part is to have the perfect distance between the subject and the light source and to balance it perfectly with the natural ambient light of the workplace. You really need to be as precise as possible to find the right lighting contrast. The big game changer with the H6D-100c is the central shutter that allows me to reduce hard ambient light by shooting up to 1/2000s while still being able to correctly expose my additional light source,” explains Roman.

To be honest, the H6D-100c is absolutely mind blowing. After almost two years of using it, it still amazes me with every shot. Colors are perfectly transcribed and the amount of data you get, even in low light, is extremely rich and precise. The definition of 100mp gives you the chance to work on a large angle portrait without losing any details in the face of the subject and to keep an incredible amount of details in the clothes. You can see the fiber of the fabric on a full body portrait. This is excellent for art proofs.

Fascinated with photography from the age of 17, French photographer Roman Jehanno graduated in 2008 from the Paris-based photography school, Gobelins. There, he was introduced to Hasselblad as his class shot on Hasselblad 503CW cameras. In 2014, Roman won the prestigious title of Hasselblad Master in the general category. See more images from his Peruvian portrait series here.

WITH THE HIGHEST QUALITY

Seeking out the winter storms of the Scottish Highlands, Ruairidh McGlynn ventured into rain, sleet and snow in weather as cold as -15°C (5°F) with the X1D and XCD 45, where he was intrigued to capture the cruel beauty of the area’s intense conditions, seeing the Highlands from a fresh, snowy perspective.