Norwegian photographer Pål Hansen has photographed an immense list of actors, musicians, and other notable celebrities, including the likes of Alicia Vikander, Kit Harington, Nicole Kidman, Courtney Love, and Jackie Chan. With his reputation of making anyone feel at ease in front of his camera, Pål always comes away with a unique story of his own about how it is to photograph these star subjects. 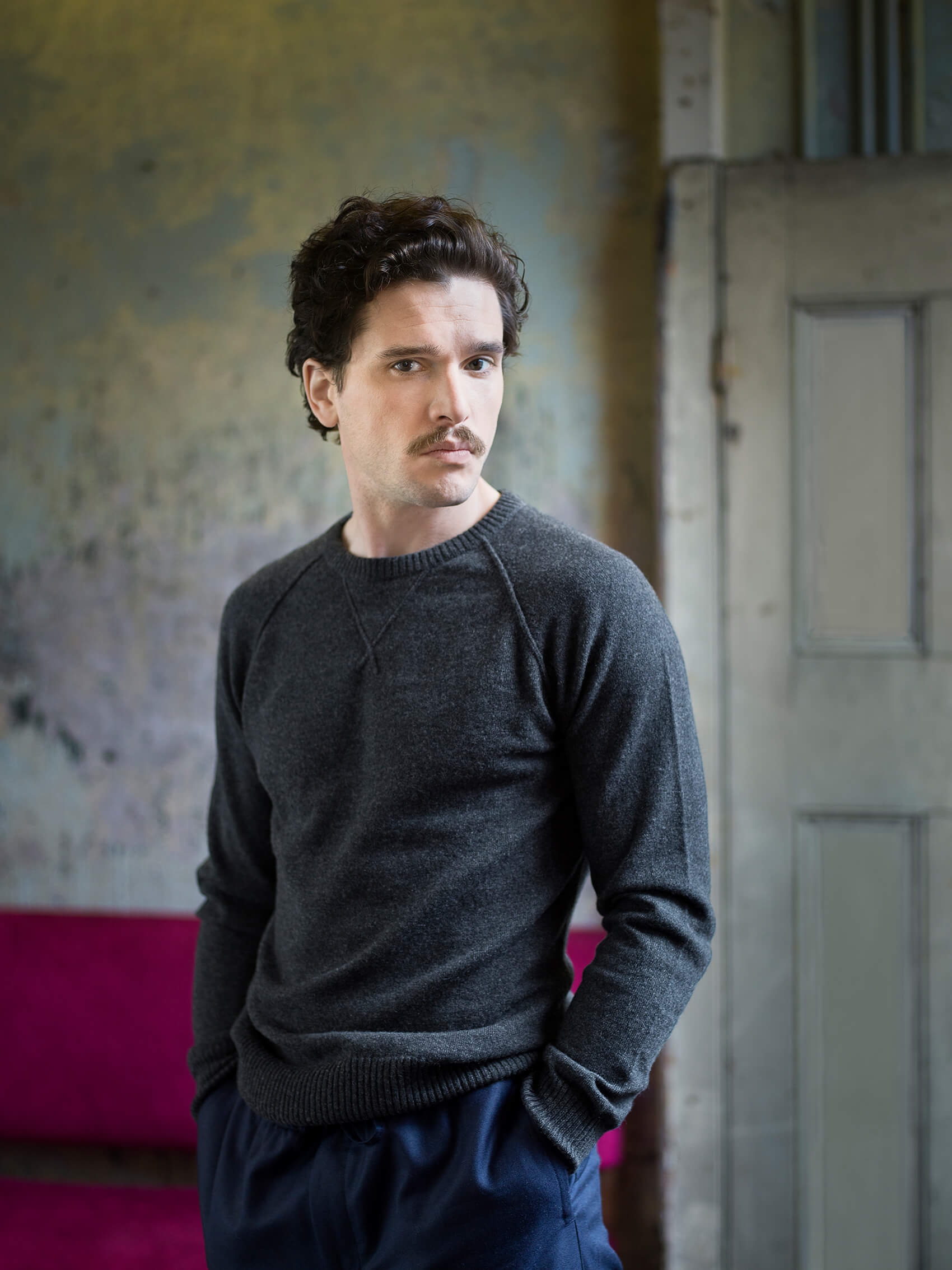 This shoot with Kit Harington was done for Emmy. I had been asked to provide a location and we were looking to create a cover and 7-page fill for their magazine. The Game of Thrones actor was in the middle of a west end play in London for which he had to grow a moustache. It gave him a completely different look to the long haired, disheveled look he had as John Snow in GOT. It did however suit him. It gave him a little of that 70’s Burt Reynolds look. Or, as Kit said, (pulling his chin back and tightening his top lip), “Borat”. Kit was very easy to work with and photographed well. Having the luxury of a location house and three hours of his time meant that we could achieve a lot. 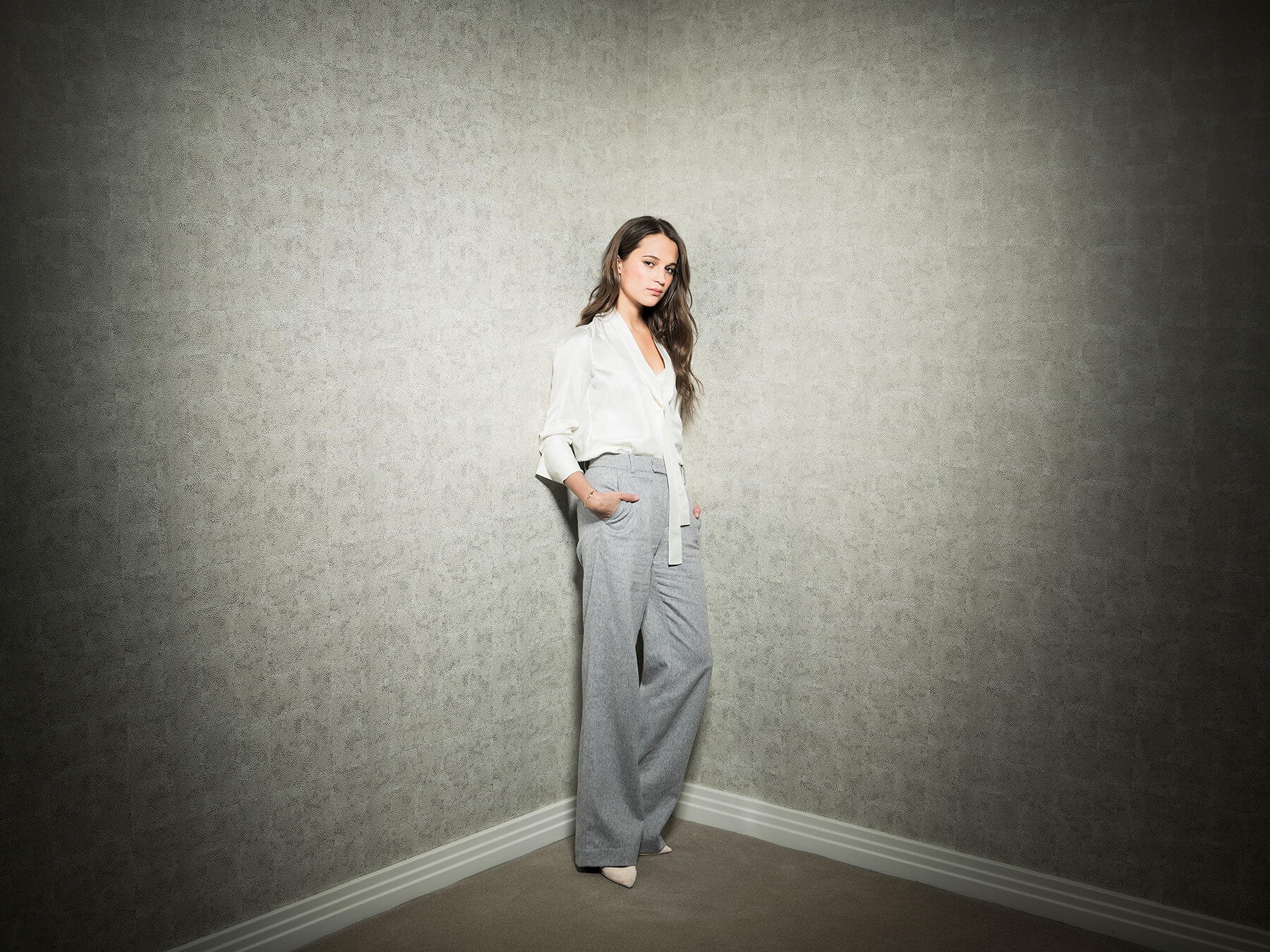 I photographed the Swedish actress in a hotel room in London. She was there on a press trip to promote The Danish Girl. I remember she came in, still energetic after a full day of interviews. She had that relaxed Scandinavian attitude to her, not fazed by having been nominated for an Oscar. She was beautiful, but in that effortless way, relaxed and cool. We only had 20 minutes and wanted to create a cover and inside shots for the Observer New Review. A backdrop helped give a cleaner image that didn’t have the look of a hotel room. And, like one of my all-time favourite photographers Irving Penn, I like using corners and the perspective that gives you. 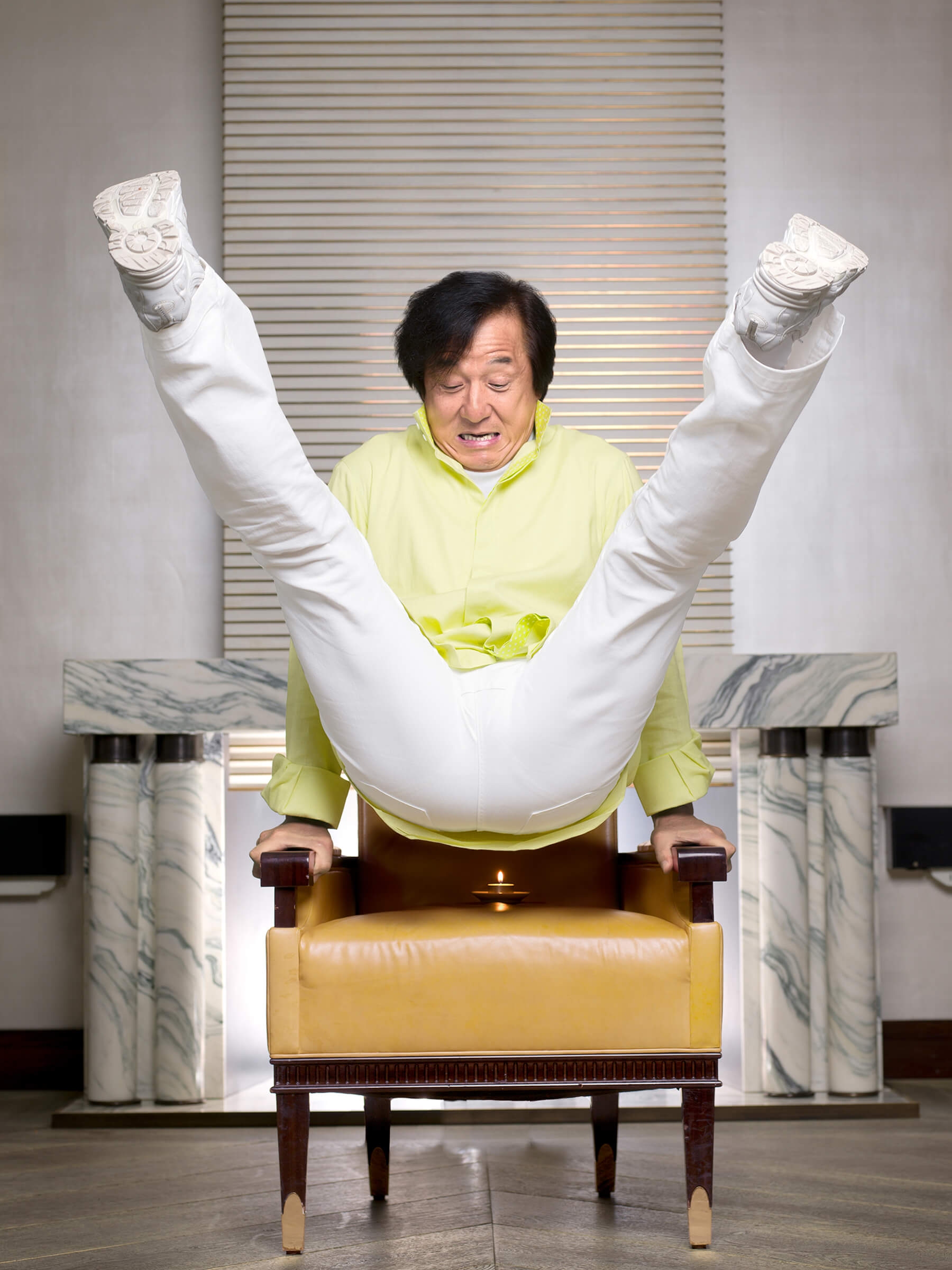 I photographed Jackie Chan in the Corinthia Hotel for the Observer Magazine. I wanted to find a way to show Jackie’s physical abilities and came up with the idea of having him lifted above a chair. I then looked around and found a candle to place underneath him, which I thought could bring that extra element to the shoot. By luck, Jackie turned up in white trousers too which worked well in the setup. Jackie is such a legend. He can still do moves at the age of 60 that I have never been able to do. The lift he does in this shot is amongst them. 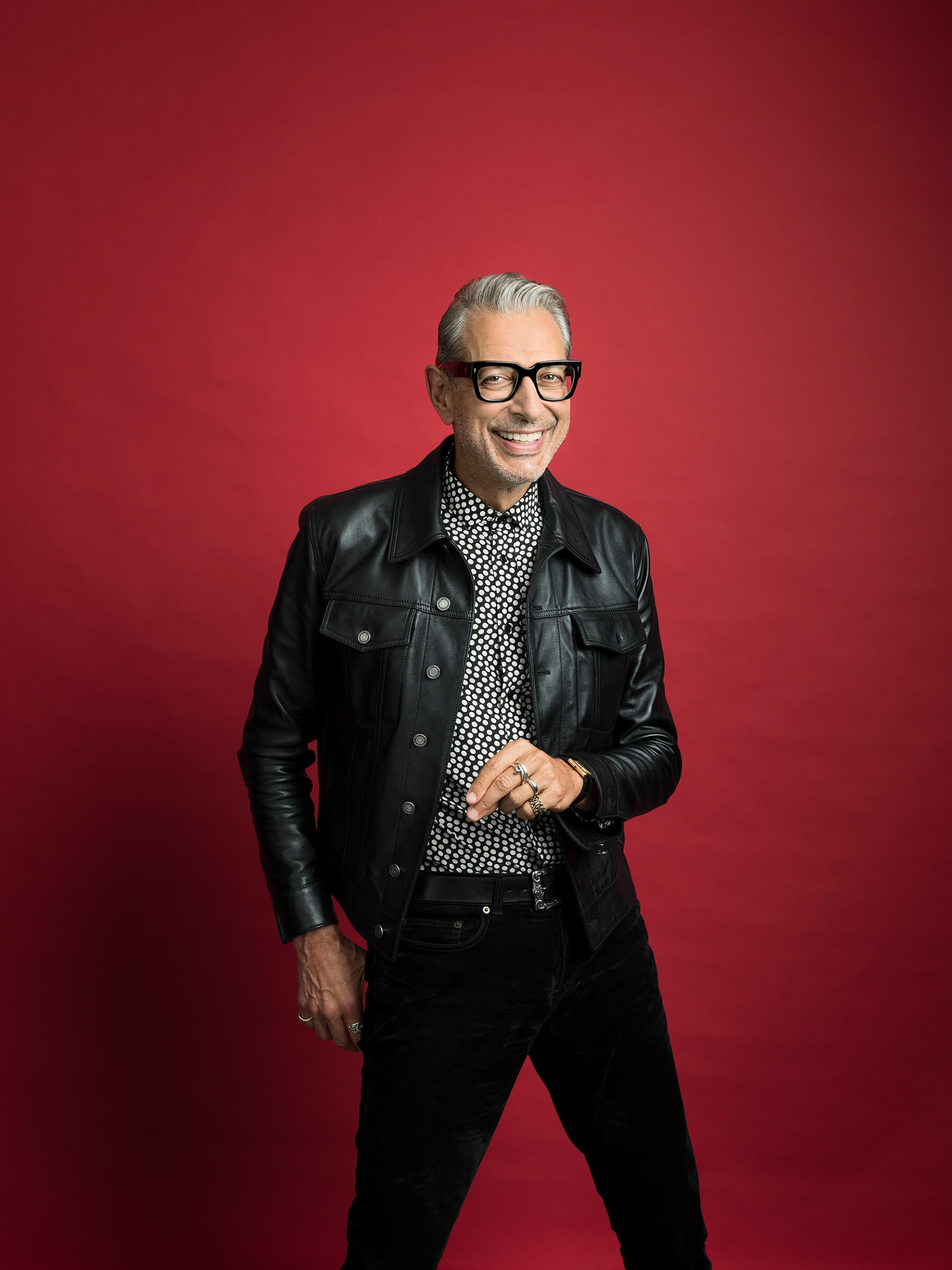 Jeff is probably one of the most stylish people on this planet. He is just so cool that it is impossible not to come away with a good shot. This shot was on the back of a shoot with Jeff and Jay Rayner for the Observer Magazine. Jeff had recently released a jazz album and they were both discussing music and all that jazz! At the end of the shoot I managed to get 5 minutes with Jeff on his own. I had a red backdrop ready and Jeff stepped in. The thing about Jeff is that he can pull moves and a smile that rewrites the rule book of poses. The way he moves would look wrong on anyone else, but as he does it with such conviction, it looks so cool! The word Cool Cat in Jazz was made for people like Jeff! 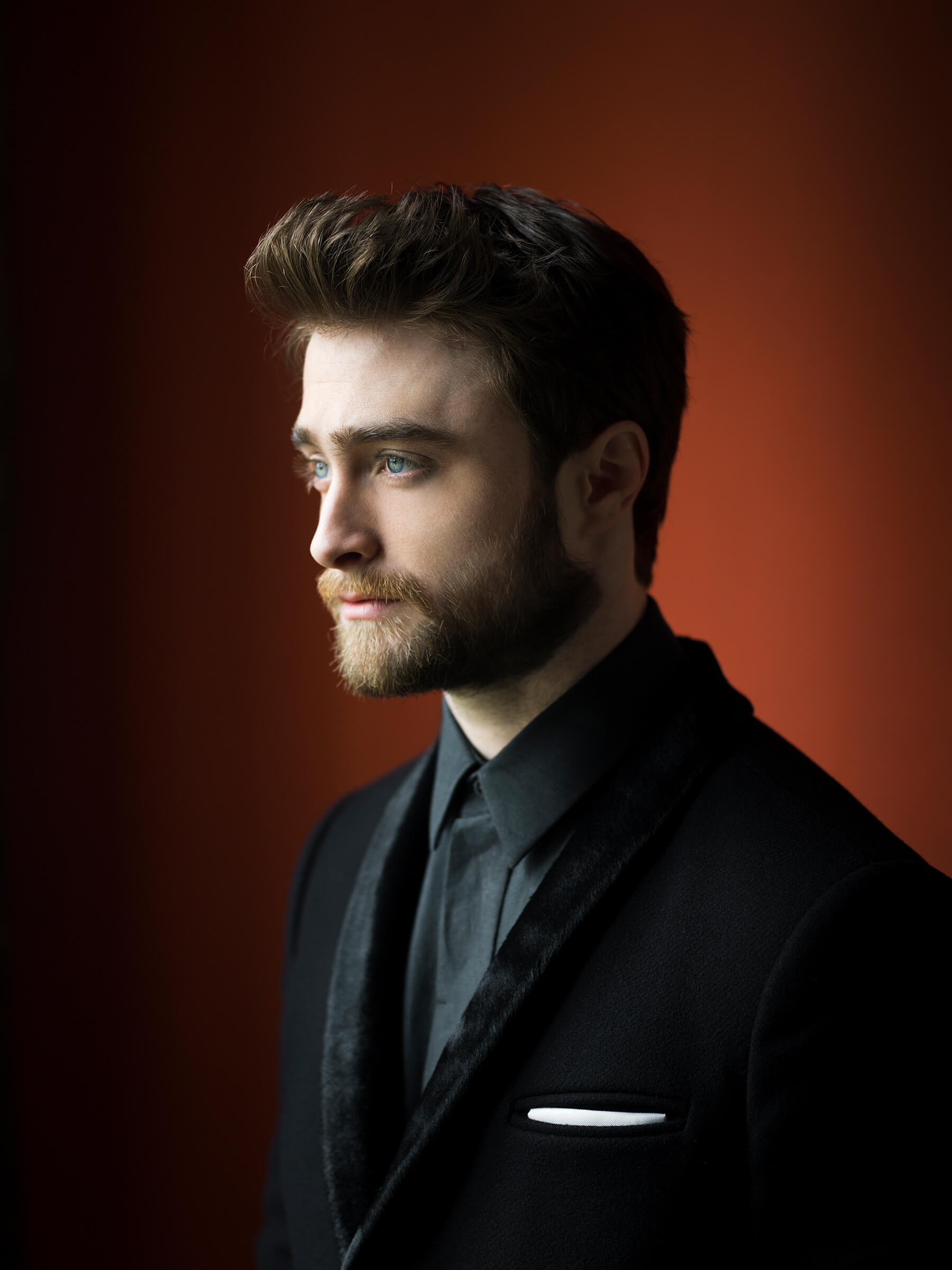 This shoot was done for Future Films magazine. I had found a location that would give us a certain old school mansion look. However, when we walked into the house, we discovered that it was a little too lived in – covered in dust and a man still walking around in his pyjamas. The picture editor opened a fridge and the stench of six-month old milk hit the whole house. However, Daniel laughed with us about the unpredictable nature of the house. This shot of Daniel was one of the plainer shots from the shoot taken in front of one of the only plain walls in the house where the wallpaper was not peeling off. 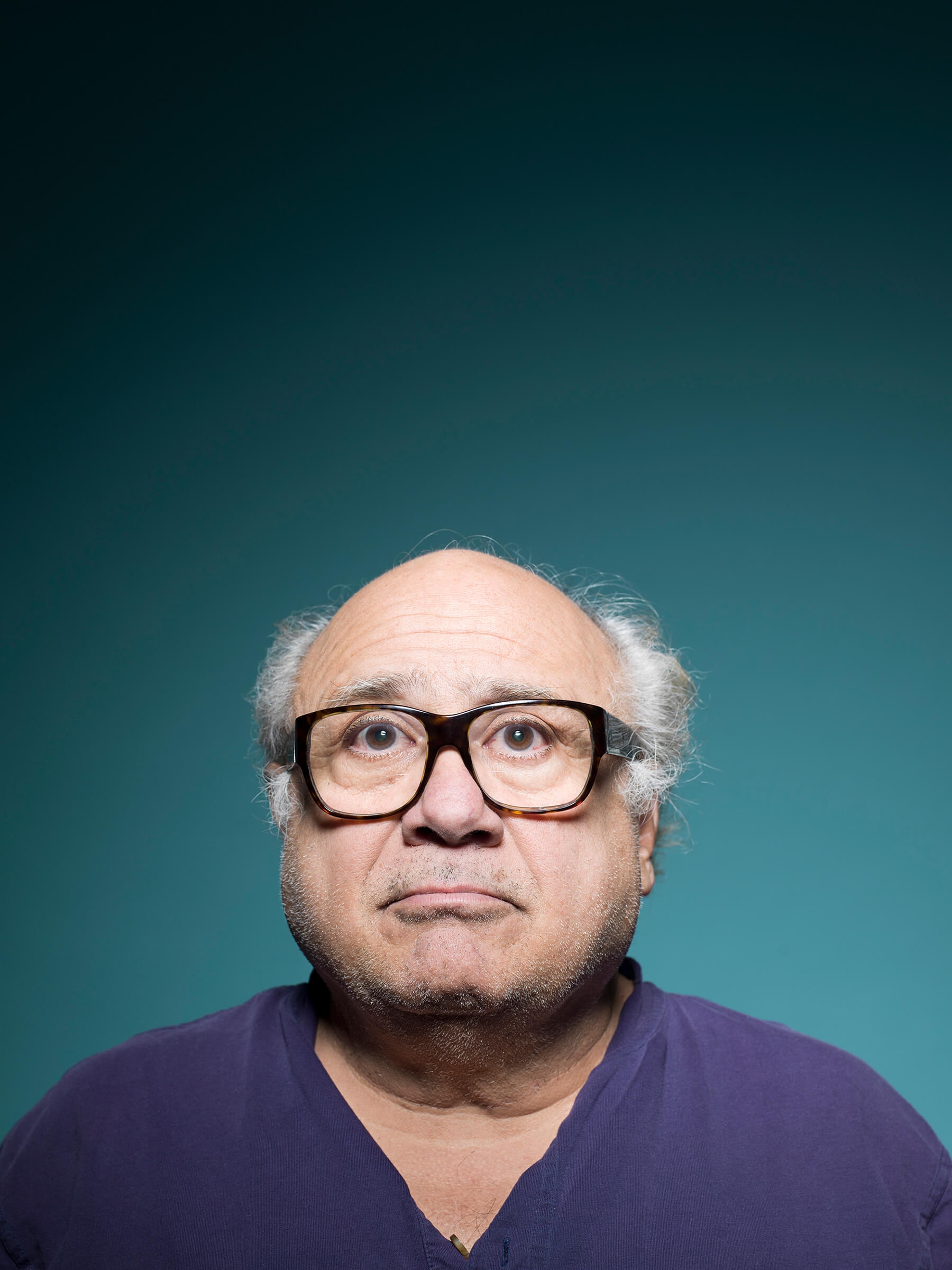 Danny is one of those guys that if you don’t like him, then you know it’s something wrong with you, (and not him). I remember Danny from many of the great TV series and films from the 80’s and his popularity has again increased in the last decade or so. I had some ideas for this shoot – one was to have him stand with one of his socks in his hand and a bare foot. (Danny takes Instagram photos of his bare foot in different places around the world.) However, when I went to go in for a 3/4 shot, this angle automatically appeared when I looked through the lens – a happy coincidence that occurs when a 1.95m man meets a 1.47m man. 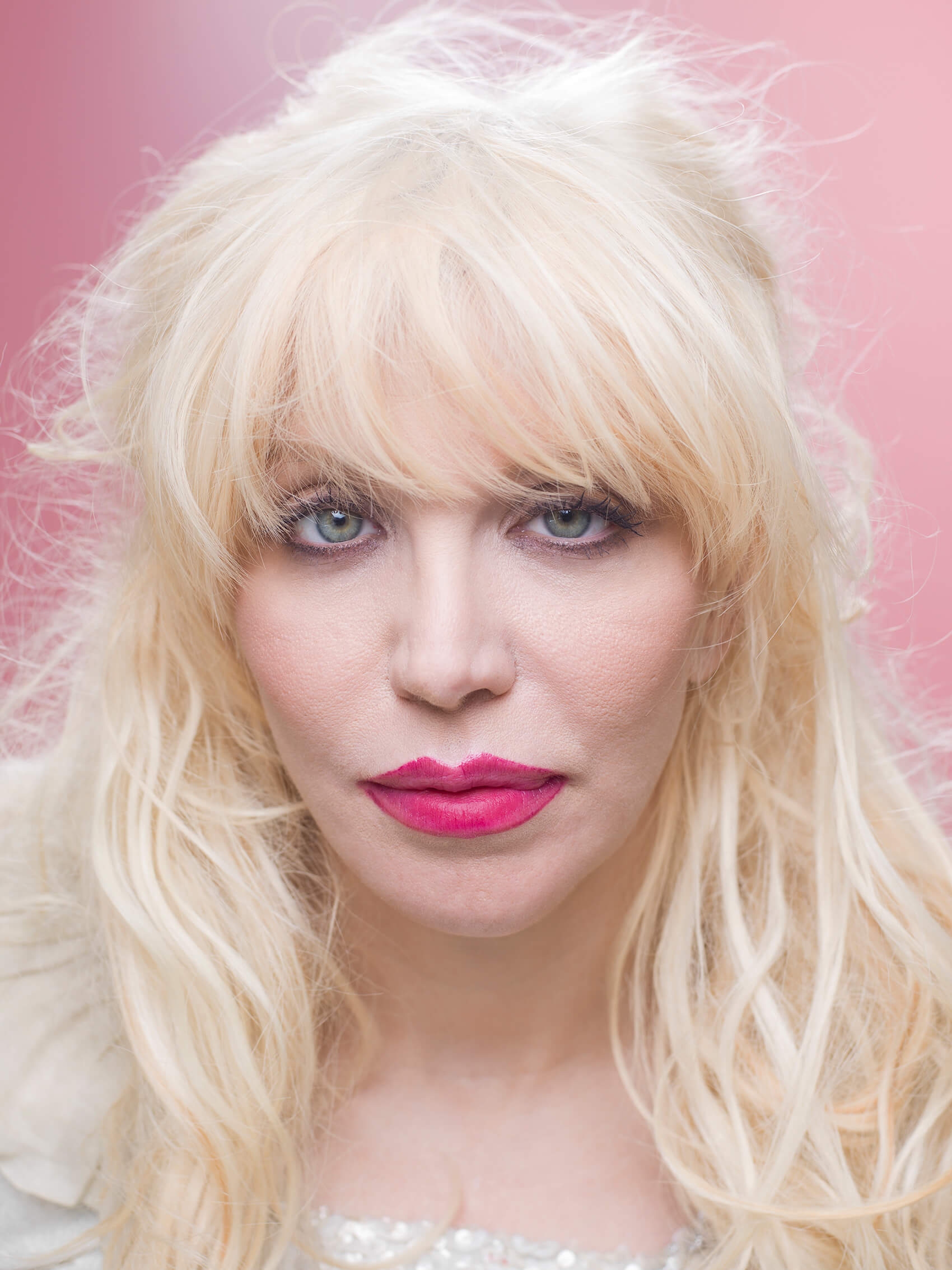 I remember setting up for this shoot with Courtney Love for the Sunday Times Magazine. My assistant and I were preparing lights and backdrop in the studio whilst Courtney was sitting in the adjacent makeup room. My playlist was playing over the stereo, and on came Little Roy’s version of Come As You Are (reggae version). My assistant and I exchanged a panicked look as I signaled to him to turn it off - FAST! He ran over and skipped the tune and we hoped we had gotten away without any damage.

Thirty minutes later, Courtney stepped into the studio and the shoot started. I had 4 setups in mind. I was talking to Courtney and giving instructions, but it felt like I was getting nothing back. I thought it best to move on to the second setup and as I did so, I asked Courtney, “Is there any specific music you want to listen to?” She replied, “NOT REGGAE!!” I smiled, told my assistant to put on some Bob Dylan and the shoot completely transformed. Courtney somehow came alive. She started to move around the room and dance to the folky tunes coming out of the speakers. I decided then to forget about my backdrops and setups and move with her. The next 20 - 30 minutes or so became a dance between Courtney, me and my camera. At the end, when the tense energy had dissipated, I got some more composed shots of Courtney to be safe, before she left the studio, leaving only heavily lipstick-stained coffee cups behind. 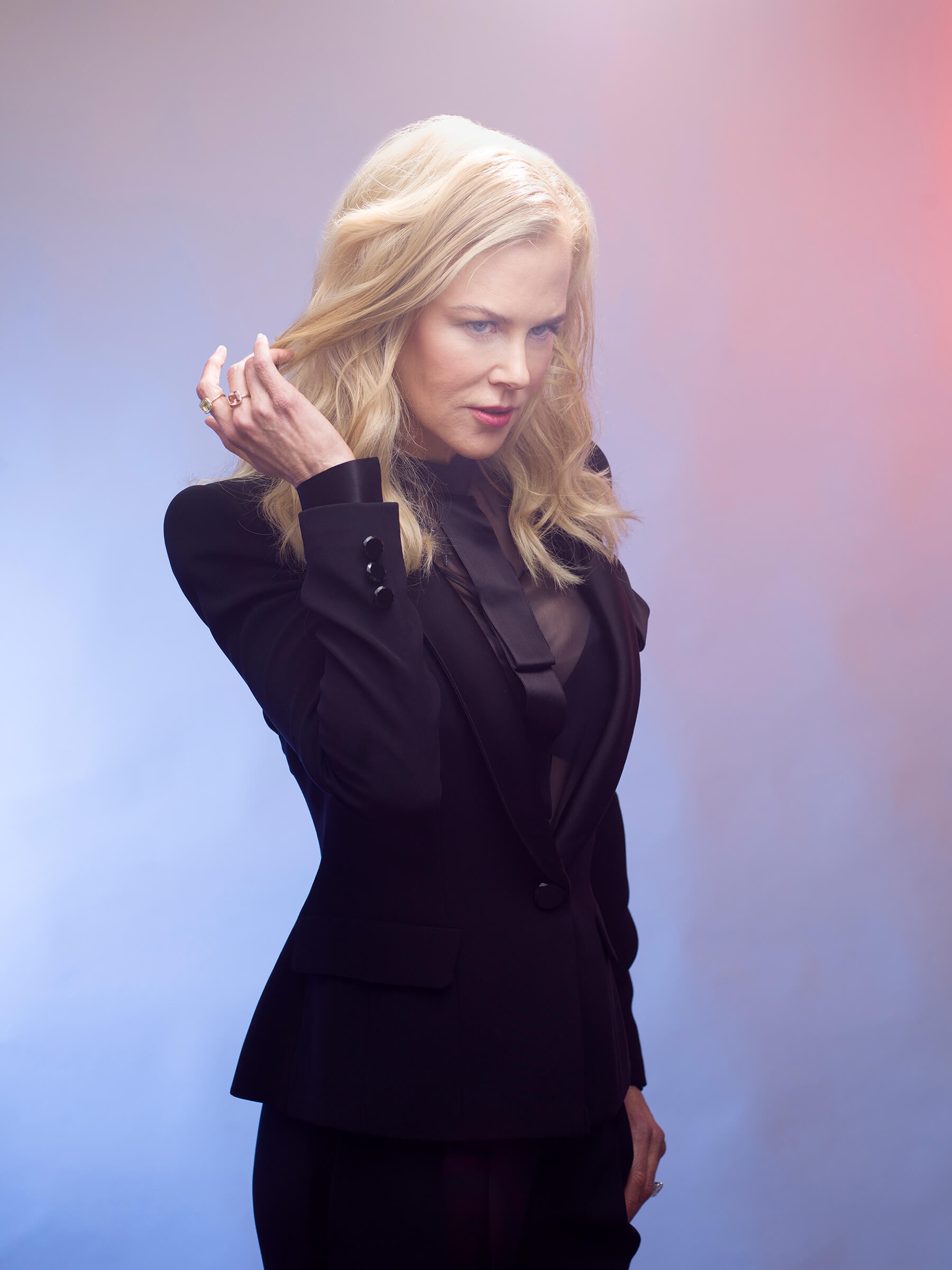 This shoot with Nicole was done on a cold winter afternoon in a hotel in London and had to be done in 3 minutes! Nicole entered the small hotel room with an entourage of people. Nicole was struck by a heavy cold, but it was not evident looking at her. All her entourage were looking over my shoulder to see if what I was doing was ok. I tried to create a conversation whilst shooting to see if I could get some natural expressions, but Nicole knew what she wanted to give. Although she didn’t break out in any expressions, she had 100% control over what she was projecting and she still gave enough to make it feel like the shoot progressed. Three minutes later, Nicole and her team left – the photographic equivalent of a 100-meter sprint was over!

I still use my analogue Hasselblad camera on some personal projects, but the digital Hasselblads have been my go-to camera ever since 2010. I now photograph all my commissions on the Hasselblad H6D-50c. I find the optics and final image quality of the Hasselblad cameras (both analogue and digital) to be exceptional. No other camera that I’ve used has been able to compete with the images I get from Hasselblad.

Studying photography at Nottingham Trent University in the UK, Norwegian photographer Pål Hansen played with the idea of becoming a fashion photographer or reportage photographer, but eventually became passionate about portrait photography when completing his final year project on Rastas in Cuba. After interning in London, he traveled around the UK to cover people effected by the Foot and Mouth crisis, which was then published in a 7-page spread, just images and quotes in Telegraph Magazine. From this, Pål started to get widely commissioned, where afterwards, his work took a focus on celebrities for many different reputable publications as well as continuing to work on personal projects often themed around social issues. His work has been shortlisted for many awards and he has several portraits in the National Portrait Gallery archive. Pål’s images have been featured in Time Magazine, British Vogue, Observer Magazine, The Guardian, just to name a few. See more of his work on his website or @pal_hansen.