THE FACE BEHIND THE FRECKLES

When I see people who stand out from the crowd, I always see it as a positive thing, a very beautiful thing. These people might not see themselves in that way and that’s kind of what fascinates me. I always like something that’s different and diverse and unique and stands out.

It was with this mentality that British photographer Brock Elbank started the Freckles series in 2012, a project that led him to start his days at sometimes 4 in the morning to begin weaving through the 8 thousand email requests he would receive from freckled members of society hoping to make the cut. Freckles got 6,500 applications, and in the end, featured over 160 subjects covering 35 countries and 6 continents. 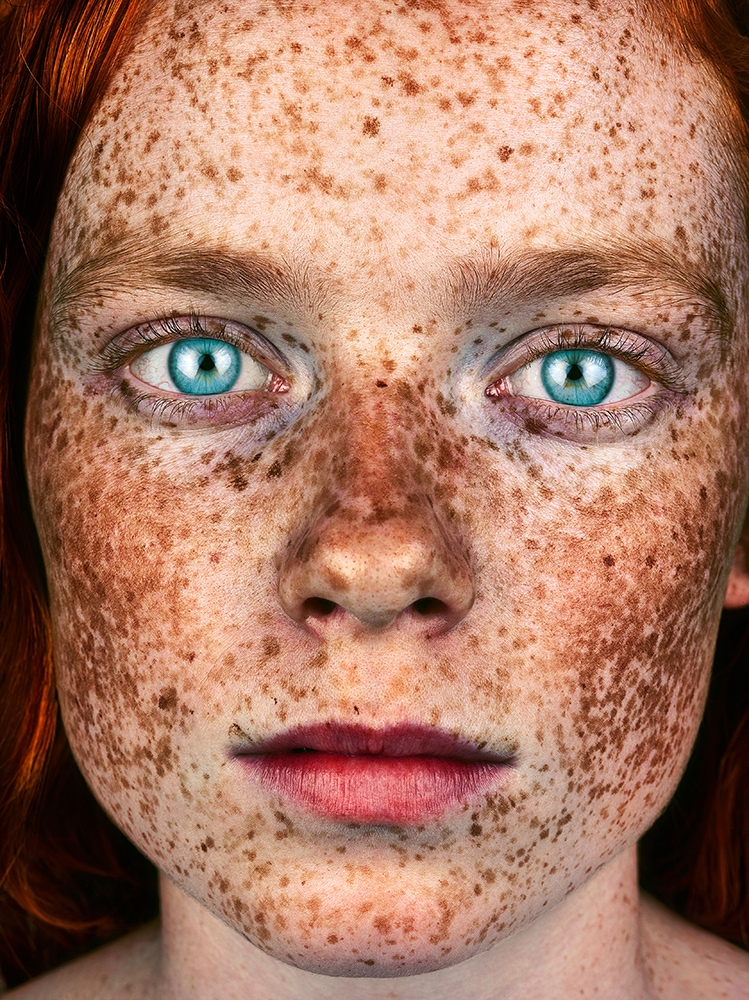 Australian-born Daisy Trinder became the face for the Freckles series. In March of 2016, she wrote to Brock with a selfie attached of her freckled face and he knew instantly that she would be perfect for the project. At the time, Brock was traveling to Sydney for his Beard Exhibition at the Michael Reid Gallery, making it easy for Daisy and her father to fly over and have her portrait photographed. A young classic beauty with amazing cheekbones, fiery red hair, piercing blue eyes, and a wicked sense of humor, Brock recounts how it was to work with Daisy for the first time two years ago, saying, "The first shot was when she was 12 years old. It was quite an experience for her. She hadn’t done anything like this before. She was a bit shy, blushed quite easily. And her image kind of became this thing. I shouldn’t have a favorite image in the series, but it is my favorite image."

Meeting again for the first time two years later in mid-May 2018 in Kristianstad, Sweden, Daisy and her mother flew out for the opening weekend of the Freckles series’ premiere at the Regional Museum of Kristianstad (Regionmuseet Kristianstad) to meet Brock. Reuniting at the exhibition of Freckles was the perfect chance to recreate the original portrait that Brock originally shot on the Hasselblad H4D-60, but this time with the H6D-100c. "It was interesting trying to replicate the portrait now when she’s almost 15 years old; trying to get her head in almost the same position was quite challenging. She’s more angular in the new picture. A little bit sharper, more mature features, and about 30 cm taller than she was before," comments Brock. On top of that, photographing the original portrait early March in 2016 at the end of the Australian summer, one notices that Daisy’s freckles were much denser versus shooting the new portrait now in mid-May.

"The second time around, I think Daisy was aware of my work process. She knew we were going to do exactly what we did before. I mean, she just did it. She kind of nailed it. She’s a bit more confident, she’s older, she’s a bit more worldly-wise. I can see that subtlety, that in the first one there is a sort of innocence about her face that isn’t so much in the second one," says Brock about working with Daisy the second time around.

Shooting the follow-up portrait of Daisy two years later with the H6D-100c, Brock was astounded by the quality it produced. He loves his H4D-60, having shot everything on it for Freckles along with his previous series, Beard, and his current series, Vitiligo; with a pixel ratio of 8500 pixels in height for his files, it’s perfect for his work.

But then you move onto the H6D-100c with 11500 pixels in height and the clarity sort of hurts your eyes, it’s so good. It’s so pin sharp. The file quality really is phenomenal!

In 1987, at 14 years old, Brock Elbank purchased U2’s Joshua Tree Album, fell in love with the imagery, and knew that he wanted to become a photographer. Moving to London at the age of 21 after completing art college, Brock started working at Metro Studios and started his photographic career with fashion and portraits. He moved to Sydney in 2004 and went on to work in advertising photography. In 2010, he purchased the Hasselblad H4D-60 and was the first photographer in Australia to acquire this camera. He still uses it today. Brock moved back to the UK in 2013. Check out his amazing work at mrelbank.

For the photographer who demands nothing less than the best from their digital camera, we present the H6D-100c. Its large sensor offers an almost full field-of-view from our HC & HCD wide angle lenses and is capable of recording breathtaking detail, even in poor lighting conditions. Learn more here.